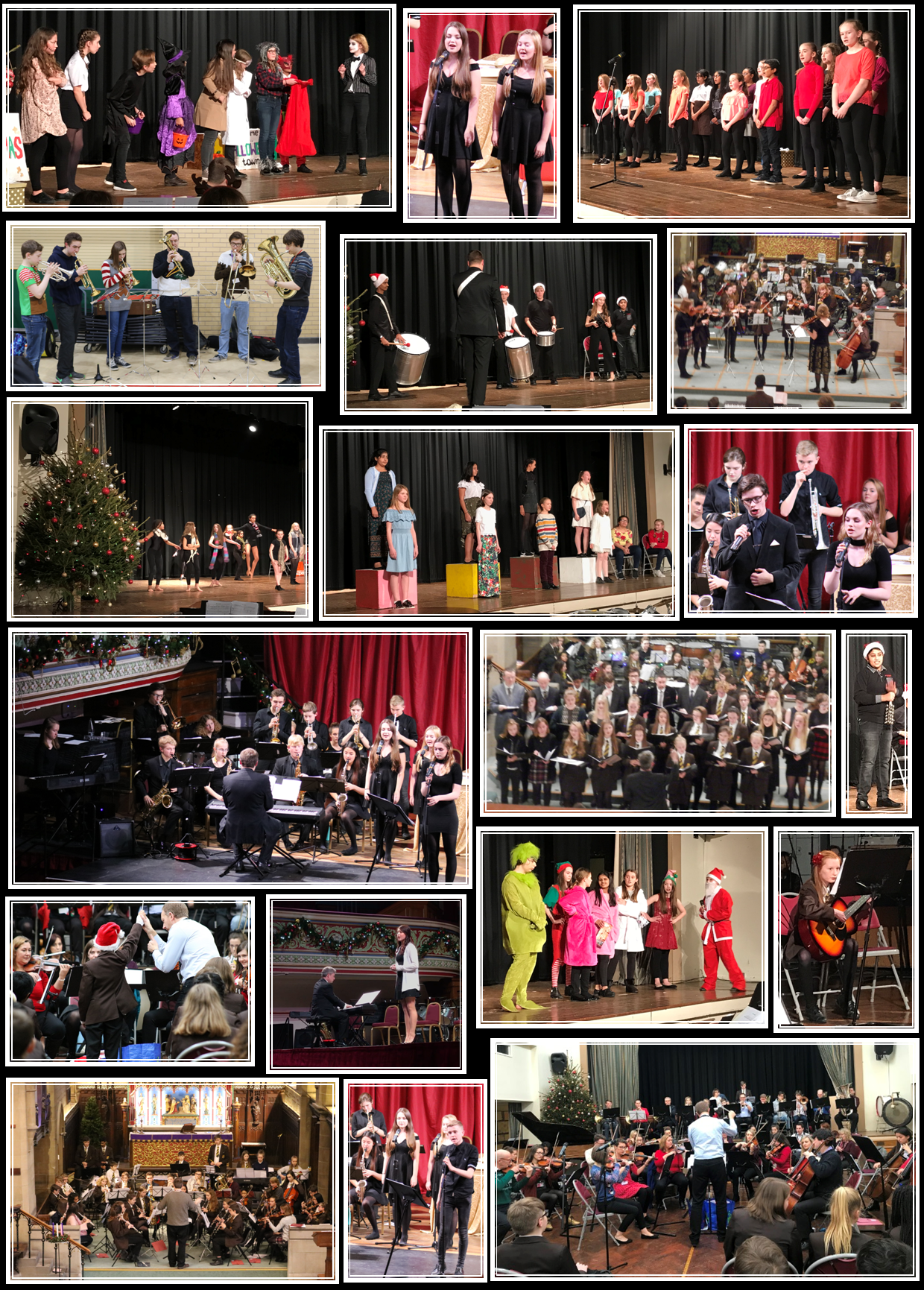 The department undertook a very busy schedule of events in December. These included a Christmas Showcase evening, the Carol Service, carolling with the Brass Group, performances at Prize Giving and a visiting orchestra performing for our year 8 pupils.

Our Christmas Showcase was again performed to a packed out Swann Hall. Performances were given by the Concert Band, Junior Choir, Senior Choir, Soul Band, String Group, Guitar Group, Percussion Group and Dance Club. In addition, there were four excellent drama performances written and performed by our very own Youth Theatre Group.

Our traditional carol service took place once again in the local St James Church. With welcoming carols played in the foyer by the HGS Brass Group the evening service started off in conventional manner with the first verse of Once in Royal David’s City performed solo by year 7 pupil Cerys Harrison. The traditional 9 lessons were read by a variety of students from all year groups and were interspersed with a variety of carols. Musical performances were given by the Senior Choir, Concert Band, Junior Choir, String Group and Guitar Group, as well as a jazz piano solo of While Shepherds Watched by year 13 student Ruth Jennings.

The Soul Band entertained our guests at Senior Prize Giving as they arrived at our new venue of Dewsbury Town Hall. Our singers excelled at performing in this wonderful venue, with vocals from Holly Ward, Rowan Lightfoot, Kirsty Gregory and Fiona Maynard. The 45 minute set included pieces such as Uptown Funk, Monkey Man, My Girl and Don’t Know Why. Michael Upham also joined Fiona in a rendition of Baby it’s Cold Outside. There were improvised saxophone solos from Georgina Moore and guest Matthew Rhodes (this year’s winner of the HunterArt prize). The band were then featured during the ceremony with a performance of Mercy.

Later in the evening the audience were treated to something very special. Year 13 A level music student Megan Dransfield gave a solo rendition of Puccini’s aria O Mio Babbino Caro. This was a truly stunning performance that was rightly highly praised by staff, students and our visiting guests. Megan was accompanied by her singing teacher Mr Hall who then provided the background cocktail piano music at the drinks reception afterwards.

Not content with winding down to Christmas on the last day of term, we welcomed the ‘Musica’ Orchestra into school to perform for our year 8s. Performing a wide range of pieces, from Star Wars to Bohemian Rhapsody, the Orchestra entertained us all – whilst subtly introducing classical music and the instruments of the orchestra to our year 8 students. There was a conducting competition, hunt the Haribos event and some of our older students got the chance to perform with the orchestra.